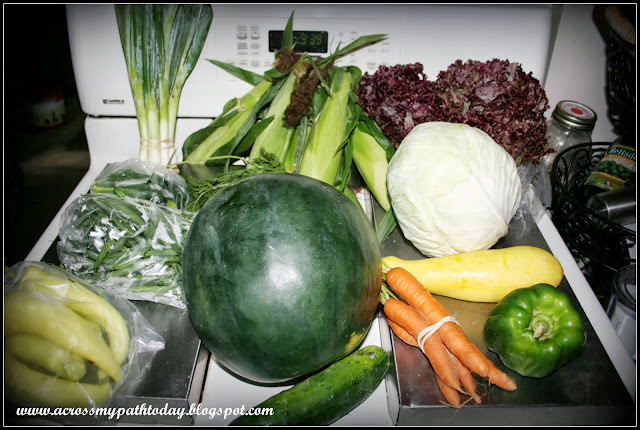 Looks Great, doenst it.
I was out of town on Saturday so M'honey picked up my share for me.
Hes good like that! Thanks Baby! ;)

We got scallions, some of the most delightful corn I think we've ever eaten, and 3 small heads of red tip lettuce.  There was a nice packet of green beans and though you cant see it well, there is a small package of  pickling cucumbers behind the green beans.  We got a watermelon this time (Im going to go cut it up as soon as Im done with this post) and another beautiful head of cabbage. Im really loving those cabbage.
There was a bag of sweet banana peppers (Im assuming..there was no hot sticker on them), a slicing cucumber, a small bunch of carrots, a yellow squash, and a green bell pepper.  Though its not shown here, there was also a carton of multi-colored cherry tomatoes.

So far this week, I've used some of the scallions greens in a really great Chicken dish in addition to some of the new potatoes I got in my share lat week! Ohhh.. its sooo good & so simple..
I also steamed some of the corn in my pressure cooker for a super fast & tasty side.. Yum!!

Have you heard of  Loaded Potatoes & Chicken? 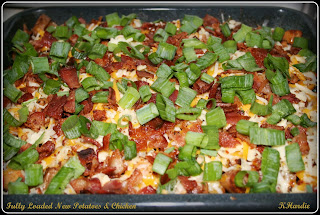 This is the whole pan I made just after I layered on the cheeses, bacon, & green onions, right before I put it back in the oven to melt...

This next one is what it looks like afterwards.. and actually this was all that was left.. Oink Oink! 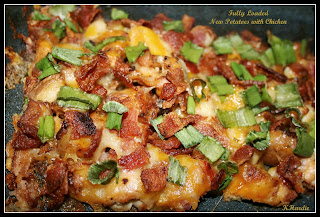 I had a normal sized portion but someone who shall remain nameless ate A LOT!
He also said that this was a recipe that I could make again.. High Praise that is, Trust me! :)
I'll definitely be making this again.. It'd be great with salsa or sour cream or maybe even some mayo in the cheese... With or without anything other than the recipe calls for, it was delish!

I got this recipe from Facebook and cant find the originator again to give credit..  I will say, though, this recipe is all over the internet, and the ingredients are the same for the most part.  A few folks have tweaked the recipe here & there..  This one has done so to the cooking temperatures and the instructions but other than that, its the same as the others. Here is the recipe!  Enjoy! 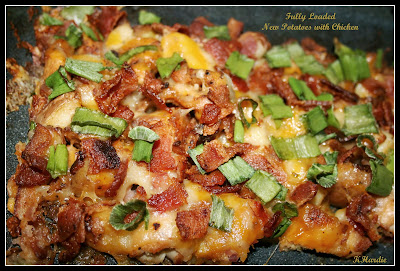 Another recipe I made on Sunday was a recipe that my mom made when she was up visiting last summer.
We had a little BBQ and she whipped this together for us.  Everyone who ate it fell in love..
I'll be the first to say I dont think it looks too appetizing, but I have to be honest and say I dont really care!
Its heavenly, no matter how it looks..  Dont judge a Scalloped Squash by its looks.  ♥ 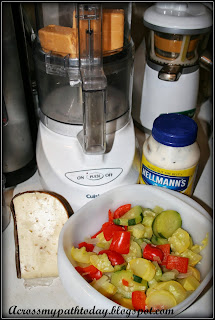 Mom makes hers in the microwave and I do not.  I steamed large chunks of zucchini, yellow squash, the white part of a leek, sliced and 3/4s of a very large red bell pepper.
I shredded cheddar cheese and a about 2-3 oz of a beautiful cheddar onion cheese I had on hand, then I added about 3/4 cups of mayonnaise to the cheese & folded it in with the steamed squash in a casserole dish..  It needed a little bit more liquid than I gave it so I added some of the water it steamed in.. a little too much, me thinks but its ok.. This is a very forgiving dish.

If you consume breadcrumbs or croutons, they would look pretty on top and taste pretty good too. Im gluten sensitive, so I just left mine plain.

I put it in the oven to melt the cheese & finish.  Mom makes the entire thing in the microwave, so you can do that too if thats what you like to do.  She lives in Texas so turning on an oven in the summer is the last thing she wants to do..  Here in Ohio, its not that big of a deal. :) 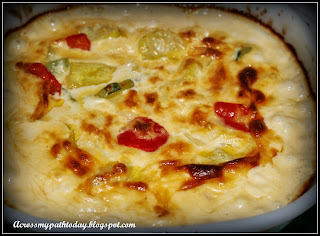 Then I proceeded to enjoy myself a plate of this bunch of yumminess!
Ok.. I really had 2. ;) 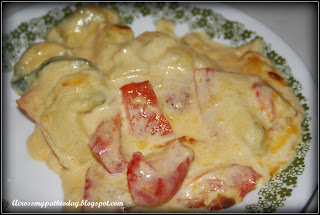 I had that and a lovely side of my Cucumber Salad that I keep marinating in my frig..
Its just sliced cucumbers, red onion, Red Vine Vinegar & a little bit of water..
Yum!! 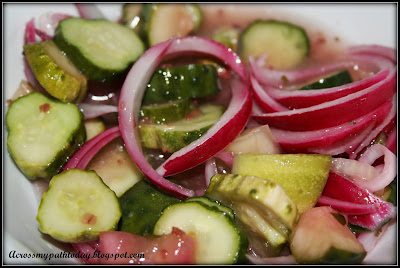 I've got plans to make more Sauerkraut this week.. and Im looking forward to it too. We've almost finished the jar I made several weeks ago (my first attempt) and it has been to die for.

I think Im going to try to make some pickled peppers with those banana peppers.. like pepperoncinis.. yes?
I need to find a recipe.. Wish me luck!

Stuffed Bell Peppers are on the menu this week.. Besides the one I got from the CSA, my neighbor brought me a bag full of bell peppers.  I cant think of anything I love more to do with them than make Stuffed Peppers!  Yum!

My neighbor also gave me 3 bags of radishes, and more corn.  Another sweet friend brought me some zucchini & yellow squash from his garden when he found out mine has been a dud this year.
I love my friends & neighbors.. They're the BEST!! ♥♥♥