Well.. I just crazy busy last week... but the good news is.. I still took a few pictures so you can see what I was up to!

Here is my weekly CSA Share for Week 16!  Its a beauty! 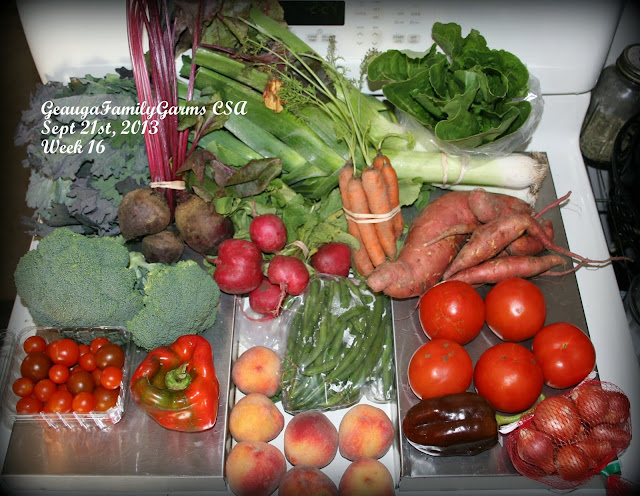 In addition to the CSA Box.. I ordered a bushel of Slicing Onions, a half bushel of Roma Tomatoes, and 2 pints of Ground Cherries. 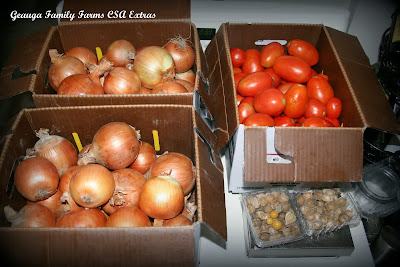 How gorgeous are those babies??  Whoohoo! 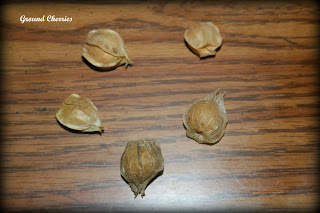 They have a cool papery husk that are very similar to tomatillos but much smaller. Most of these are about the size of my pinky fingernail. They're slightly fragrant, sweet, and have a light essence of pineapple.
M'honey said they didnt taste at all like pineapple to him.. Maybe mango?  Actually.. I think they smell and taste like Ground Cherries.  ;) 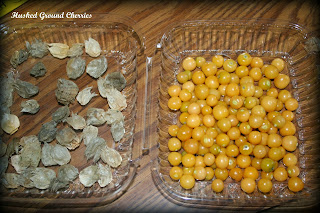 Once these babies were husked, I had just over 2 cups of them.  I used a handful one day in a juiced smoothie I made and the rest are still sitting on my table waiting for me to do something with them.
I plan on making Ground Cherry Jam today..  Definitely a small batch but thats ok.. I honestly dont eat much jam, jelly, or preserves, but I do enjoy making them. 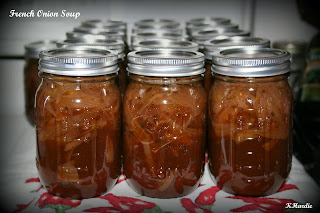 Onions!!  Who doesnt love French Onion Soup?   Oh, dont answer that!!   I adore it & so does everyone in my home with the exception of M'honeychild JC.  Hes a finicky 24 year old boy. Its a texture thing for him.
He doesnt like mushrooms either... silly boy!

Using a little more than half of a box, I got 16 pints of French Onion Soup after cooking it most of the day!  It cooked low & slow... Yum!
I had a bowl & so did M'honeychild C..  She takes after her mama in a lot of ways and loving French Onion Soup is one of them.

To make the French Onion Soup, I needed beef broth or consomme' and didnt have any on hand.  I was even almost out of Beef Bouillon which I normally keep loads on hand so I went hunting in my freezers and located a nice size package of scraps & leftovers from a Beef Tenderloin I bought a few months back and also a package of beef bones and scraps from a rib roast.  Yum!  I simmered these in a large pot of water for the entire day, adding onion, garlic & parsley.  The meat fell off the bone and after simmering all day long, the broth was flavorful and rich.  I removed the meat, split up the broth & made the French Onion with some of it & a few days later I made Vegetable Beef Soup with the rest of the broth, the meat, canned veggies and a few extra veggies for added flavor.  Then I canned those babies up & got 17 jars canned & a quart & a pint left over for the frig.  I love having soups on my canning shelf. Its just so darn convenient! 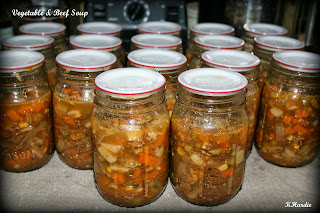 A few other ways I used up some of my CSA produce this past week was to make an awesome
Peach Cobbler by Paula Deen!

This doesnt look exactly like hers because I used a half cup of Gluten Free Flour because I was out of regular flour! I couldnt believe it.. When did THAT happen?   I plan on making it just like this again sometime. It was out of this world & Im not a huge peach fanatic.  Thats saying something!  Yum! 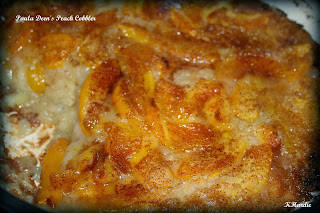 M'homey loves his pork chops with slices of onion simmered slowly on the stove top.. so thats what he got and I just steamed the green beans.  With beautiful fresh green beans like this, you dont need anything else to make them special.. They were HEAVENLY!  They sure arent anything like those poor canned creatures they also call green beans.  (wink wink) 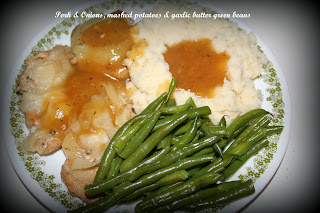 We also had Surf & Turf With Organic Rice Pilaf & Broccoli one night and I simply steamed the gorgeous broccoli we got last week.. It was so tender and so good.. There is nothing better than fresh fresh veggies, just lightly steamed & spritzed with a touch of butter or margarine.  I drizzled Melted Garlic Butter on the broccoli since I'd made a tub of it for the crab legs.. Yum!  This is one of my top 5 favorite meals of all time. 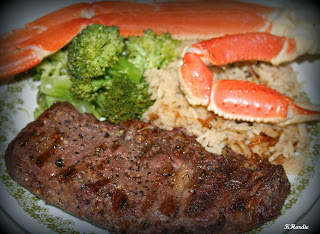 I canned up 8 quarts of tomatoes this week too.. Im not sure how it happened, but I dont have one picture of it. :)    Shocking, huh.  ;)   I also juiced up some of those peaches along with a few cherry tomatoes, a hand full of the kale, some pear juice, carrots, celery, and....a hand full of those ground cherries.  It was really tasty!  I need to use my juicer more.. I really enjoy it.

Well thats it for Week 16..   Hope you enjoyed a look inside my world!